Wine auction breaking out the champagne and sparklers

If you’ve never experienced this event, it really is a sight to behold. Quite possibly the largest air-conditioned tent you’ve ever seen is filled with elegant decorations and about 600 people from all over, ready to party. When the drinks start flowing, the bids start growing!

Between the 50 live auction lots, and the silent and “super-silent” auctions, there are nearly 300 lots up for grabs this year, according to Kate Mikos, communications manager for the Destin Charity Wine Auction Foundation. Topping the list is a hunter green 2008 Tesla Roadster Sport, dozens of luxurious stays at far-flung locales, original art from Justin Gaffrey, even a bottle of Pappy Van Winkle’s Family Reserve 15-Year Bourbon. The latter is currently going for about $1,400 a bottle.

The live auction – which will be held Saturday, April 28 at 1 p.m. on the North Lawn of Grand Boulevard – is always kicked off with the famous Lot No. 1, dubbed Magnum Force. Participating winemakers of the past and present have each donated a magnum bottle of wine – 50 in total – and it’s a winner-take-all showdown on the auction block. For those keeping score at home, that’s 75 liters of some of the world’s finest wines, and last year it brought in a winning bid of $55,000.

Mikos also pointed out several brand new vacation destinations for the foundation. There are trips to Australia, Iceland, and Amsterdam, and two trips to South Africa (including one safari to the Molori Lodge).

For the adrenaline junky in the audience, there’s the Lightning Round. Auctioneer Ursula Hermacinski – back for her fifth year – will start the bidding high on these “flash lots” and go down. The lot goes to the first paddle in the air – unless two bidders tie, in which case, the bidding goes up!

Some truly incredible wine will be available for the taking. Participating vintners include the likes of Hamilton Russell, Relic, Arkenstone, Hertelendy Vineyards, Antica Napa Valley, Mollydooker Winery, and Champagne Delamotte – just to name a few.

As part of the Reserve Tasting that precedes the live auction, VGS Chateau Potelle winemaker Jean-Noel Fourmeaux will be on hand. Fourmeaux was one of the original judges from The Judgment of Paris, the famous international wine competition held in 1976.

“Clos du Val will also be here and they were the winery in The Judgment of Paris that put California on the map,” Mikos said. “They’re donating one of only five remaining bottles in their cellar from 1972 from that competition.”

Look for that bottle in the Clos du Val live lot, which includes a trip for four to Meadowood Resort in Napa Valley, a private tour of the winery, and a three-year vertical of 3L Cabernet Sauvignon spanning from 1983-85.

The Destin Charity Wine Auction isn’t just considered big for a local event. Wine Spectator Magazine has ranked it the No. 3 charity wine auction in the country two years in a row. The foundation has donated more than $15 million over the past 12 years, with $2.7 million earmarked for 15 Northwest Florida charities in 2017 alone. 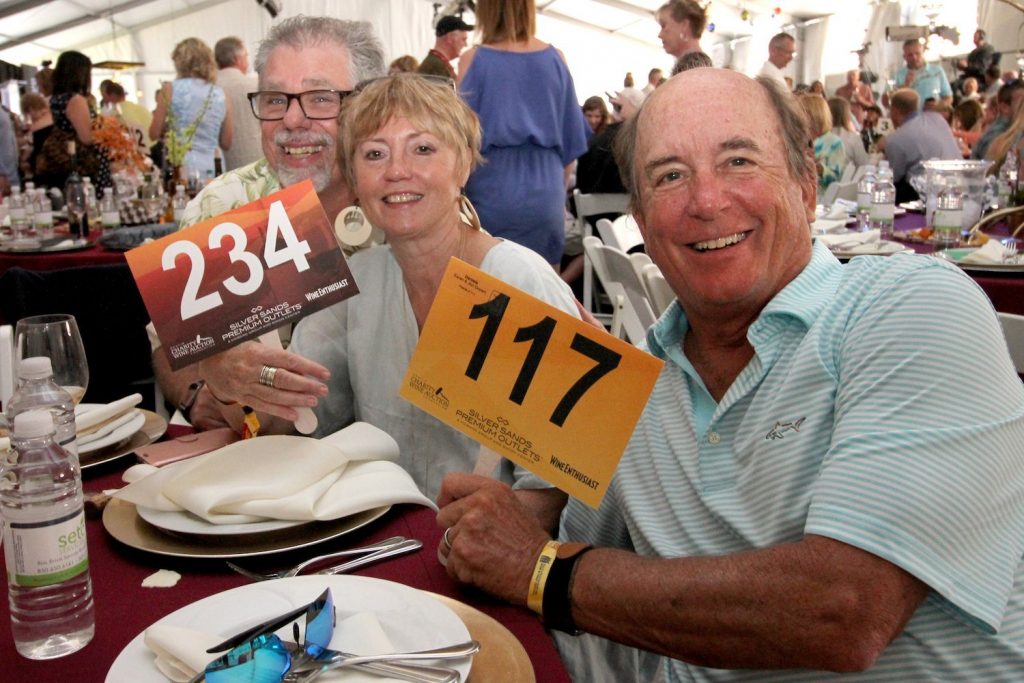 “We always have a dollar amount goal, but we’re always thankful for whatever everyone is willing to give,” Mikos explained. “We’ve beat our previous number every year, and so our goal is to continue to do that.”

Mikos hinted that the DCWAF team has some surprises in store for year 13.

“Our patrons will see a little bit more presence from our charities this year. We’re really trying to bring the focus back to our mission a little bit more,” she said. “There are a lot of incredible elements that go into the auction, but at the end of the day, we’re there to raise money to help children in our community.”

The only way into the tent is to purchase a Patron Package, which includes your choice of 12 patron dinners Friday evening, Saturday’s auction, and admission to the South Walton Beaches Wine & Food Festival Sunday. A limited number of packages are still available at https://501auctions.com/dcwa.

NEAT Tasting Room: Prepare to be shaken and stirred

The Bay welcoming guests by reservation