Talk to Dave Rauschkolb, and you’ll soon hear the excitement in his voice. This is a man who, despite much success in the area, doesn’t seem to be one resting on his laurels or deciding to relax his pace. Talk to him for any length of time, and you realize that it could be just the opposite – he could just be getting started.

“It’s rare and fortunate when someone has an opportunity to blossom with very few restrictions,” said Rauschkolb. That answer was in response to a question about his long history of investment of time, energy and resources in 30A, and it’s evidence of how the longtime restaurateur sees the world and his place in it. “With enough drive and passion, there is no limitation on happiness and positivity.”

Rauschkolb has seen his life as an adventure from the beginning.

“I’ve never lived my life with a fear of anything,” he explained, adding that “my parents were positive, smart, humorous, and gave me a great foundation to go out and explore.” So when, in the last semester of college, he was presented with the opportunity to open a restaurant with his friend Scott Witcoski, he quit school. “I was just taking classes, postponing real life, and here was real life. I was ready to go.”

It was 1986 when, at age 24, he and Witcoski opened Bud & Alley’s, named for two pets. They set out to hit a balance between good food and creating a relaxed atmosphere that fit the relaxed vibe of the town by the sea. Witcoski was back of house, Rauschkolb was front, and there wasn’t much around.

“Seaside was really nowhere. I got really excited that with the restaurant, I could have the opportunity to have a voice in a new community,” he said. “So I became interested in being a part of it and began to work with dynamic, interesting people to create a sense of place, to create a town.”

Bud & Alley’s became a jumping-off point for Rauschkolb’s love of Seaside. He had witnessed the unrestrained growth in places such as Panama City, and it was something he didn’t want for Seaside, for the place where he was putting roots. Neither did Seaside founders Robert and Daryl Davis, and so it was easy for Rauschkolb to buy into the vision of what his budding community could be.

“I’ve always been committed to preserving the area’s character and natural beauty,” he said, “so I was just as excited to get involved in the community as I was to be on the ground floor of the 30A culinary explosion.”

He never shies away from a new project, and so he became involved politically, working to put people in government whose values aligned with his own. Soon Rauschkolb was serving on the Seaside School Board, and he’s also heavily involved in the county through the A Better South Walton organization. 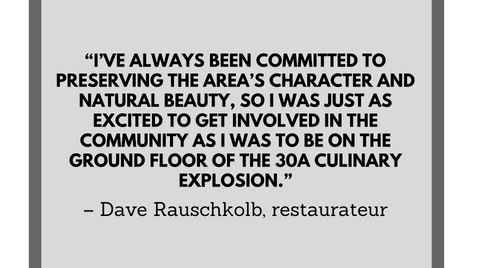 That passion has never dissipated for the restaurant business.

“I’ve been so fortunate to attract amazing people who work with me. It’s really fun empowering people to succeed with me,” he said, adding that he has an abject dislike of burning people out. So even as he added Taco Bar, then Pizza Bar, and Black Bear Bread Co. to his list of restaurants, he made sure that his staff knew his focus was on them, not just the bottom line. All full-time staff are required to take two days off (in a row) a week, and he creates an environment that is about contribution, not “a micro-managing older owner,” he explained. “There’s one waiter that’s been working with me for 19 years, which is amazing in an industry that traditionally has a lot of turnover.”

As he has grown his restaurant footprint on 30A, he’s made a point to keep the ideas approachable and the food consistent. It’s all about building community, making places where people want to gather, year after year. However, what he hasn’t made a point to do is really to take things slow.

“I have a hard time saying no,” he said with a chuckle, “and I’m not afraid. When I see opportunity, I pounce.”

Although it could be easy to dismiss such catch phrases as motivational soundbytes, Rauschkolb’s personality is actually anything but slick. He is approachable, engaged, fun, and really down to earth, just as you would imagine the person would be who has helmed the personality of the iconic Bud & Alley’s hangout for all these years. He’s the guy you want to share a beer with, the one who asks about your family, the guy who will pick up that trash on the beach when no one’s looking. In short, he’s a friend of Seaside, and the town seems to love him back.

Thirty-plus years in the restaurant business finds Rauschkolb, 56, with an 8-year old daughter and a 14-month old, and he is just as excited to be in Seaside as he’s always been. His restaurants are close by, his family is growing up in this community, and he still takes time to surf his beloved Gulf of Mexico waves, often with his partner in Black Bear Bread Co., Chef Phil McDonald. His days are undoubtedly full, and yet sometimes he still wakes in the middle of the night with an idea for how to tackle a challenge.

“I say just jump on the slide, and slide to the bottom,” he said. “When you get to do what you love to do, there are no limits.”

This article originally appeared in the Spring 2018 edition of the Food & Wine Guide for South Walton.

On a brisk February afternoon, we had the privilege to spend a few minutes with Dave Rauschkolb, founder of Bud & Alley’s Restaurant in Seaside, Florida.

Much has changed in the 30 years since Rauschkolb and his business partner, Scott Witcoski stopped in Seaside on their way to Panama City Beach for a day of surfing. Real estate development, an ever-increasing number of vacationing visitors and a much needed growth spurt in the culinary offerings on 30a are things Rauschkolb has witnessed first-hand. Not one to just sit back and watch things happen, Rauschkolb has played a key role in fostering and nurturing many of those changes from the start.

“When we first started, the California food movement was just kicking off and hadn’t quite made it to our area yet. There were just a few restaurants on 30a at the time and in a way, we ended up being one of the pioneers of 30a.”

In those days fine dining was French cuisine and most of what was along the Emerald Coast was fried seafood and one French restaurant. “We had this great rustic, simple food, locally sourced as much as possible. We knew we were going to be doing something special on 30a.”

At the time Bud and Alley’s opened in January of 1986 there were only four other places to eat on 30a. Rauschkolb and his team traveled every year those first few years to remain on the cutting edge and experience first-hand the latest developments in the culinary world.

Over the years, many of 30a’s best and brightest chefs have worked and trained with Rauschkolb and his team. “Good food begets good food” said Rauschkolb. “It truly is a community here on 30a that helps one another out when its needed.”

So how does Rauschkolb and his team continue to raise the bar? “We have always tried to be on the forefront of everything. The only way to do that is to travel, open your world up. We did lots of travel research for Taco Bar, the first authentic Mexican taqueria on 30a. We did the same thing for the Pizza Bar.”

It is not just about the food at Bud and Alley’s. The restaurant group boasts an impressive lineup of talent in the kitchen and in the front of the house as well. As Dave pointed out, “its important that we continue to refine our lineup.” With the recent addition of Chef Phil McDonald at Bud and Alley’s Pizza Bar, one can easily see that Rauschkolb and his team are serious about taking the 30a dining experience to new heights.

Ask anyone that has worked for Rauschkolb and you will hear that he is someone that leads not just by example, but through empowerment and a willingness to let his team take the reins of the restaurants. Rauschkolb is not one to micro-manage his team and it is a philosophy that has worked extremely well over the years.

As our area begins to draw visitors from California, Chicago and the northeast, what does Bud and Alley’s have in store to continue to be the standard bearer of the culinary scene on 30a? Guests can expect to see Bud and Alley’s even better than ever as they roll out a breakfast menu in the Spring of 2015. In planning for the roll out, Rauschkolb and a number of his chefs and managers recently visited New York City to sample some of the finest breakfast faire the Big Apple has to offer.

For the cocktail lover in all of us, a craft cocktail lineup that is sure to delight is on its way to the Bud and Alley’s restaurant group. For those of us who have fallen in love with the sunsets and special dining events on the rooftop bar, you’ll be comforted to know that the space hasn’t changed much in the 30 years since they opened.

Looking back over the years, Rauschkolb takes great pride and finds it a “real honor” to have grown to become the “center of the universe on 30a.”

Bud and Alley’s Restaurant Waterfront Restaurant is open seven days a week with lunch served from 11AM -3PM. Dinner starts at 5:30PM and goes until 10PM. For more information and to make reservations, please call 850-231-5900 or visit http://www.budandalleys.com/bud-alleys-seaside.php

Bud and Alley’s Taco Bar is currently open seven days a week from 11AM until 9PM. For more information please call 850-231-4781 or visit http://www.budandalleys.com/taco_bar.php

Bud and Alley’s Pizza Bar is open seven days a week from 11AM until 10PM. For more information call 850-231-3113 or visit http://www.budandalleys.com/pizza_bar.php