A toast to the chef

SANTA ROSA BEACH – The holidays are a time for generosity and goodwill toward men. Nowhere was the spirit of the season more evident than at Janca’s Jingle Bell Jamboree, a fundraiser held Dec. 17 at Down Island Gulf Seafood Restaurant.

Longtime local Chef Brannon Janca was diagnosed with lung cancer for a second time this year, and the call to help alleviate some of the financial burden was heard loud and clear by the South Walton community. From fellow chefs and entrepreneurs to neighbors and even complete strangers, hundreds came out to show Brannon and his wife Stefani some love.

The guest of honor was in attendance for the food and wine walkabout, trading in his signature chef’s toque for a knit cap to ward off the evening’s chilly temps.

“I’m a little overwhelmed, but all my friends – Jim Richard, Jill Tanner, all the people who have helped – I wouldn’t expect anything different from those guys,” Brannon said as he looked around the sold-out tent set up outside his Highway 98 eatery. “It’s pretty humbling and it’s pretty bad-ass.”

“These last couple of months have been very overwhelming for us,” added a tearful Stefani. “This is a relief.”

“You take the money out of it, and just the support we’ve gotten has been a big deal, too,” Brannon said. “Even in the restaurant, ever since we announced this, we’ve gotten a lot of support from the locals just coming to the restaurant. It’s awesome.”

“That’s what makes this community different from any other around here,” Stefani agreed. “In just four weeks, they did this.”

“This” included musical performances from Dread Clampitt and Cadillac Willy. A personalized board allowed well-wishers the chance to write their words of encouragement. Inside, a silent auction of over 100 lots filled the length of the dining room, offering bidders everything from event tickets to artwork, restaurant gift cards to vacation packages – and more.

“This was all given by our tremendous community,” said longtime friend, former business partner and culinary mentor Jim Richard. “I’m actually kind of speechless. To see it happening and the turnout, it makes me pretty emotional. That’s why we live here and the reason I’ll never leave.”

After spending the early part of his career helping to build the Stinky’s Fish Camp empire with Richard and Todd Misener, Brannon and Stefani realized their dream of opening their own spot in January of 2022.

The initial diagnosis came midway through renovations of the Highway 98 eatery, but Brannon persevered and achieved clinical remission in time for the grand opening. The spot was a hit, and Down Island quickly earned accolades, including being voted Best New Restaurant by Emerald Coast Magazine readers. Everything seemed to be coming up roses, until Brannon learned his cancer had become active again. Always the fighter, he’s been undergoing treatment, while putting in shifts at his restaurant as often as he can.

Down Island Gulf Seafood Restaurant is located at 2780 U.S. Hwy. 98, in Santa Rosa Beach, and can be found online at www.downislandsrb.com. Additional donations to the Jancas can be made via Venmo to @Stefani-Pall-Janca 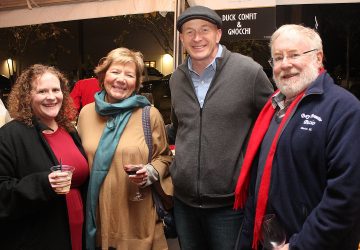 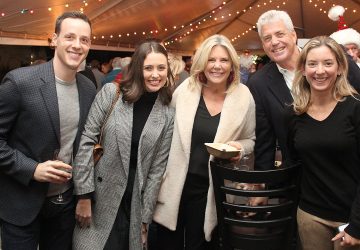 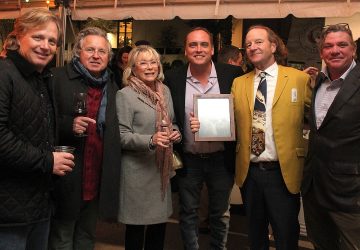 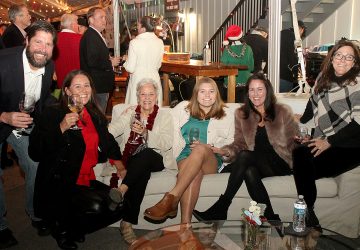 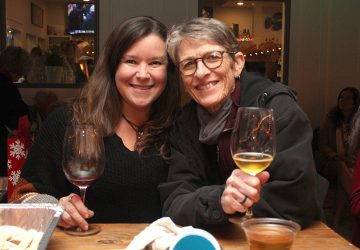 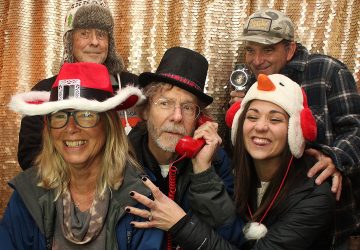 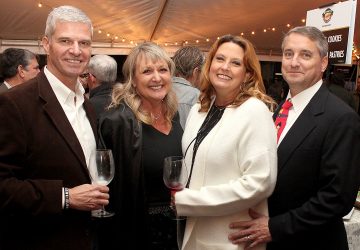 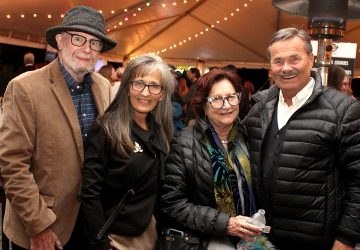 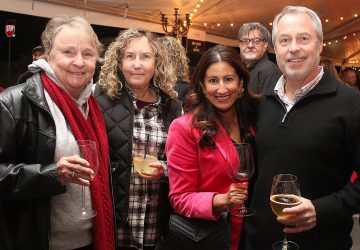 SANTA ROSA BEACH – A group of locals have come together to help Chef Brannon Janca, owner of Down Island Gulf Seafood Restaurant in Santa Rosa Beach. The holiday fundraiser, called Janca’s Jingle Bell Jamboree, will be held at Down Island on Dec. 17, from 6 to 9 p.m. and will include live music, a wine walkabout, local area chef demos, a large silent auction, a professional photo booth, and so much more. Tickets are $100 (food and wine included). Tickets can be purchased here: Janca’s Jingle Bell Jamboree is also on Facebook @jancasjinglebelljamboree. 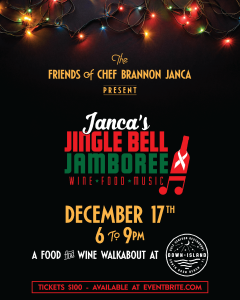 Chef Brannon Janca is a kind-hearted, incredibly talented, driven, and an all-around great guy. Brannon worked at Stinky’s Fish Camp for years alongside his partner and mentor, Jim Richard, but it was always his dream to open up his own spot. In 2017, he sold his part of Stinky’s and started the process of building his dream restaurant, Down Island.

Halfway through renovations, however, Brannon was diagnosed with lung cancer. He didn’t want this to stop him, so he kept working on Down Island while fighting this health battle behind the scenes. By the grace of God, and just before Down Island opened, Brannon reached clinical remission. Everything was going well until recently his treatment stopped working and the cancer became active again. He has recently started chemotherapy while still cooking and operating the restaurant as much as he can.

Obviously this brings all plans to a screeching halt, and now both his health and lifelong dream are at risk. To help alleviate some of the financial burden and stress, a few of his closest local friends are putting together this benefit on Brannon’s behalf.