The calendar might say spring began March 20, but at Seagar’s Prime Steaks &amp;
Seafood, the seasonal menu begins April 2. Executive Chef Lee Guidry previewed his
spring dishes during a media luncheon March 22, offering a parade of fresh produce
and seafood – much of it locally sourced.

“This is my favorite time of the year. Mushrooms, peppers, tomatoes are all starting
to pop out of the ground,” Guidry said, as he introduced his first cold apps, including
a Chilled Shrimp Remoulade.

“Food invokes a lot of memories for people, and this dish is a play on a classic
shrimp remoulade, but I’m dressing it up,” he explained. “It’s a true remoulade sauce
with poached U-12 Gulf shrimp, a julienne of baby iceberg, tri-pepper chow chow,
and crispy shallots.”

His Pan-Roasted Bobwhite Quail earned top marks from diners, offering smoky
flavors accented by a black tea brine, and stuffed with foie gras quinoa. This is all
pan-roasted and finished with balsamic and apricot glaze and pomme puree.

Seafood lovers should look into the Grilled Calamari, featuring a fresh, whole squid
stuffed with jumbo lump blue crab, basil, and shallots. This is accompanied by a
salad of watercress, pickled shallots, and mizuna – a Japanese-style arugula.

“It’s a very clean flavor, marinated in olive oil, lemon zest and pepper Espelette – a
French pepper very high on the citrus tones but not too spicy,” he said.

You’ll notice many of Chef’s spring offerings include a salad component, and that’s
by design.

“Salad plays a big part for me in the spring. I think it’s a great palate cleanser – super
clean flavors – and I’m trying to stay away from the butter and the cream in a lot of
the dishes. We’ll be keeping that theme going throughout the summer, too.”

Reviewing the menu, you may do a double-take on the savory cheesecake that
accompanies the Seared Red Snapper entrée. It’s an indulgently creamy addition
that totally elevates the fish, wilted spinach, and roasted yellow tomato coulis.

“The savory cheesecake is lump crab, whole grain mustard, green onion, shallots,
Boursin cheese and a house-made crust,” Guidry explained. “It’s the same idea as a
sweet cheesecake, we’re just omitting the sugar and changing the crust to more of a
savory.”

For the cocoa lovers at the table, the Chocolate Bomb is a vision. Hiding under
mirror glaze and a garnish of gold leaf is a dome of bittersweet chocolate mousse,
Irish cream, and raspberry on a hazelnut shortbread.

The spring menu will be available for the next three months, before Chef gives
diners a look at his summertime creations. Seagar’s Prime Steaks &amp; Seafood is
located within the Hilton Sandestin Beach Golf Resort &amp; Spa. Dinner is served
Tuesday through Saturday beginning at 6 p.m., and reservations are accepted. 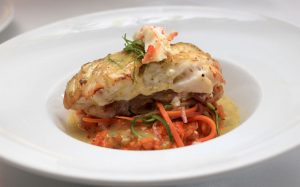 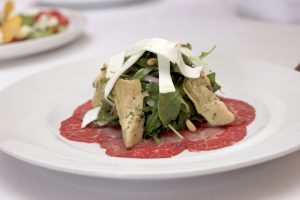 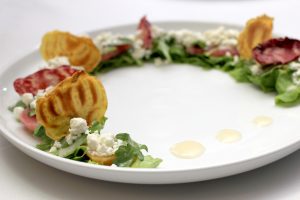 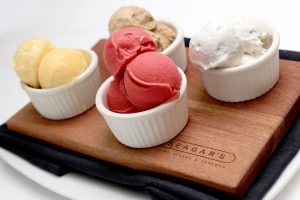