You never know where riding the waves will take one – the surfing waves, that is. Restaurateur Dave Rauschkolb and Chef Phil McDonald have been surfing buddies for years, so they understand that there is always another wave.

“I have always admired Phil for his culinary ability, and also because he is a well-rounded individual,” Rauschkolb said. “I always wanted to open a restaurant with him.”

Rauschkolb had lamented the lack of progressive bakeries in the area, and it wasn’t a bother that was going away.

“For a while we bought bread for the restaurants from a French bakery in Niceville, but it was in Niceville. And I have always had a passion for great bread. All you have to do is travel to the West Coast or Europe and you understand. I kept waiting for someone to open a bakery on 30A to bring that kind of bread here.”

When he decided to phase out his catering business, Rauschkolb realized that “someone” could be him. He had a building space open, a chef he wanted to work with, and a passion for something he really wanted to see added to the culinary landscape of the area. Thus, Black Bear Bread Company was born.

Bear Claws, Baguettes, Beer and Beyond

Located at The Shops at Grayton in Santa Rosa Beach, the combination coffee shop, bakery and cafe doesn’t have a long menu. It’s not open late into the evening, but it has Stumptown Coffee, Sardines with Sea Salt Butter and Calabrian Chili on the lunch menu, beer and wine if you’re feeling so inclined, and an Olive Sourdough loaf that will have you kicking yourself that you brought it to a party instead of keeping it all.

You’ll also find a pastry menu, with everything from a traditional scone to the more exotic Kouign Amann – a sugary layered treat that translates to “butter cake.” The coffee offerings include a traditional brewed coffee, but branch out to include café au lait, espressos, cappuccinos, and mochas. 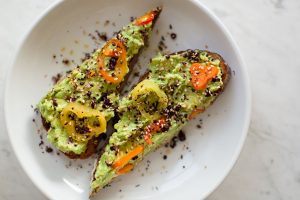 The team knew they had something good even before they opened. Rauschkolb and McDonald decided to do some testing at a market, selling their fresh breads before the bakery even opened. What they experienced was word-of-mouth wildfire; soon people were fighting for a place in line at the booth before the loaves ran out. These days, the two partners know they can expand their baking and wholesale operation, they simply need more bakers to fill jobs. For now, Black Bear Bread Company is doing a little renovation to get the kitchen to maximum efficiency and integrate the look of the retail and the kitchen space.

“The timing was great to get open,” said Rauschkolb, noting that they got open before the end of the season and have still experienced a lot of traffic during the transition to off-season. “Frankly, we’re extremely gratified the locals have completely embraced this. Phil and I are so enjoying bringing this idea to life.” 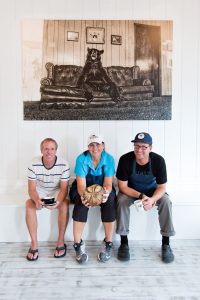 And it’s an idea full of good, crusty bread, hot coffee, and a welcome new spot that feels like it’s been a part of the community for longer than it has, because, well, it was a long time coming. But to these two, it was just time to ride that wave.